December 17, 2018
There are several Belles events that hold a special place in my heart, one of them being the quarterly dances at the Veterans’ Hospital. Some of my most meaningful moments in Belles were spent there, from dancing with some groovin’ veterans to meeting some of my dearest friends for the first time. It is a place where I feel like I am truly making a difference in the lives of others.
Last year, I attended the winter quarter Valentine’s Day Dance where I met Bill. Bill was a kind, elderly veteran who I encouraged to join us on the dance floor. Though he was hesitant at first, he got up and started to dance, and happily at that. He smiled and twirled and laughed while telling me that he hadn’t danced in a long time. As we all boogied in a big circle to Come on Eileen, Bill told me that, in his youth, he had been an actor, a movie extra, and a stunt double in an old crime movie. We continued to talk about his life and mine, exchanging interesting stories. At the end of the dance, he thanked me for chatting with him and getting him to dance, saying it was one of the most fun times he’d had in a while.
This past fall quarter, I attended the classic Veterans Halloween Dance as a pirate accompanied by some of my lovely Belle sisters, who were dressed as spider woman, a minion, a witch, a football player, a soccer player, and a basketball player! How cute is that?! I enjoyed getting to twirl around with veterans and my fellow Belles, and I even got to teach some of them a line dance! Towards the end of the night, I was dancing with an elderly veteran in a wheelchair who let nothing get in the way of his impeccable dance moves. I have never seen a bigger smile or a more enthusiastic character. When the dance was over, an employee asked me to take him out to the front of the hospital. While we made our way through the hallways, he asked me what my major was and was surprised that it was Environmental Science, as he considered it a very new field with the potential to change the world. He asked me so many insightful questions that I almost couldn't keep up, and when it was time to say goodbye, he said, “Thank you dear. Thank you. I wish you all the best, now go make a difference.”
No feeling compares to making a positive difference in someone else’s life, and being able to see it for yourself as they smile and dance the night away. These events not only allowed me to make a difference in the lives of others, but in my own as well. They remind me to dance, even when I’m hesitant, to give, even if I have little to offer, and to be thankful, especially when there is so much to be thankful for.
Molly Schaner
Women’s Leadership Distinguished Belle 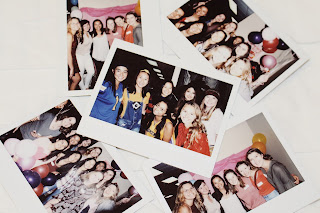